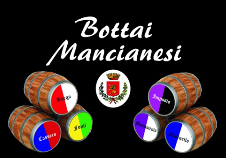 On April 21, 2013, the Bottai Mancianesi Committee, a non-profit association, whose main activity is to organize the Palio delle Botti, was set up; it also organizes other activities during the year (picnics, dinners, Christmas and Easter events, Befana, etc.) and actively collaborates with other associations in the area.

It is made up of twelve people (the Priors and Vice Priors of the six Rioni). Each year, in rotation, according to a scheme established at the time of the constitution of the Committee, one of the Priors becomes Grand Prior, legal representative of the Committee towards the institutions. The change of office of Grand Prior generally takes place in March, during the public Assembly.