The Palio delle Botti was born on 12 September 2010, from an idea of Sergio Pietretti and the Proloco of Manciano (in particular Alessio Romagnoli, Alessandro Bardelli, Simone Bistarini , Fabio Benassi , Lucia Manini and Francesco Doganieri) immediately believed in it. The Palio is part of the Tuscan tradition, but not wanting to use animals of any kind, the barrels were proposed, also because for the first three years the competition was part of the program of the Festa delle Cantine.

The Palio was organized for another two years by the Proloco within the Festa delle Cantine, then in 2013 a separate group was set up, the Bottai Mancianesi Committee, which since then has always been involved in the organization and implementation of the event.

The event has been enriched year by year with new initiatives: in 2013 the competition for the most beautiful painted barrel was established, an award that since 2015 has been named in memory of Gemma Detti, a well-known Manciano artist who died prematurely in 2014.

The first three editions took place in September, but in 2013 the Palio moves to the last Sunday of August and, in addition to the day of the race, a presentation show is added on Saturday evening.

In 2014 the refreshment point (bar, sandwiches and tasting of typical dishes) was inaugurated and a mini Palio for children was added on Saturday afternoon.

In 2015 the days of the Palio become three and the twinning with Leverano is celebrated.

In 2017, two screens were installed for the first time in Piazza Garibaldi and Piazza della Chiesa, on which all the races were projected, with greater involvement of the public.

In 2018, three screens were installed along the route and, for the first time, the men’s Palio was run at night.

In 2019, on the occasion of the 10th anniversary, an extraordinary Palio was held, during the Festa delle Cantine, which celebrated the 25th edition, with the same route in 2010 (from Piazza della Rampa to Piazza Garibaldi) and the same rules of the first edition (all teams together). The winners received the painted cencio (rag) and the new trophy, which will then pass, year by year, to the winners of the future. All the Rioni received a commemorative plaque.

In 2020, due to the Covid-19 health emergency, all public events were suspended, and therefore the Palio was also canceled.

The Palio delle Botti is sponsored by the Municipality of Manciano. 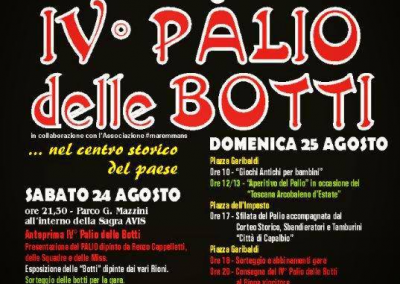 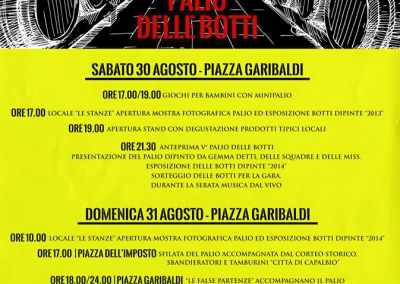 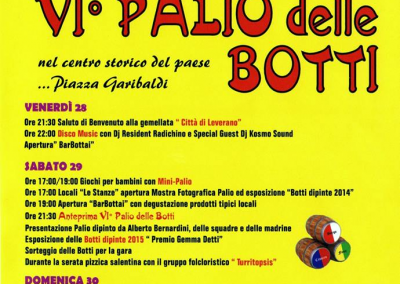 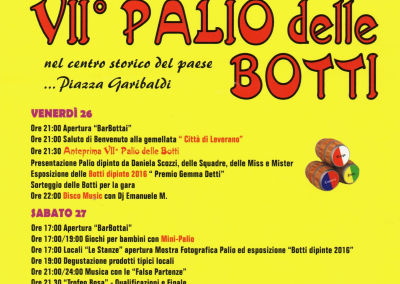 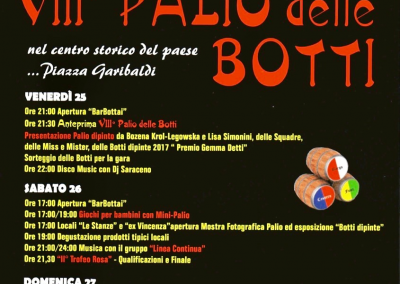 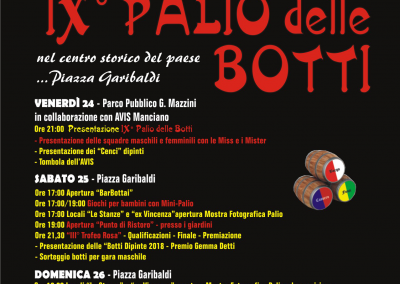 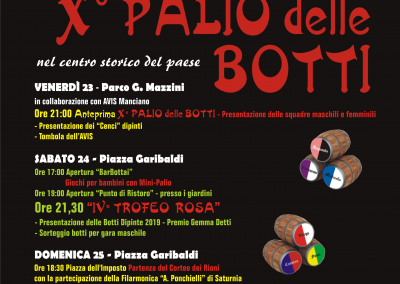 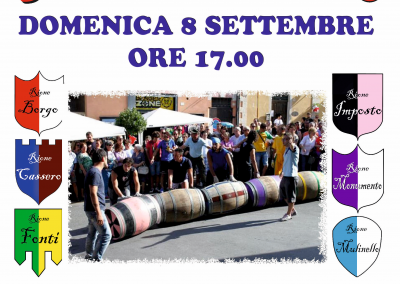